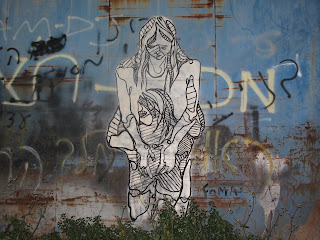 Art is the number רבדים, Established museums, Tel Aviv Museum of Art, Commercial art galleries and alternative, Private collections often displayed to the public or on loan to museums, Entry spaces of office buildings, Private offices, On institutional and organized by”Municipality, Gallery or in alternative being done in the public sphere, It can be art protest, Graffiti, Political Art, Feminist, Social and…, Generally give all the graffiti and not as a compliment Prep, Usually we know the graffiti on the street and is seen as a nuisance without the need to get to the bottom and the idea that, But there is something quite different today in Tel Aviv and he will not last much, Currents were many currents came before him, אך הסצנה הסוריאליסטית של תל אביב היא משהו שצבר לו אוהדים רבים בארץ ובעולם וזרמים חדשים שכבר היום נצניהם נראים ברחובות, Hthiln them, Affected them and begin to formulate their messages and ideas
There is a surreal street scene in recent years in Tel Aviv and Europe, Hundreds of jobs throughout the town of Tel Aviv, Many jobs have been deleted and deleted, Both by”S property owners who lost their masterpieces economic value and wide audience sympathetic, Some artists already Museums, Galleries and collectors items in them and are willing to pay them, Some were deleted by”J. Tel Aviv Municipality departments still do not understand their potential as a treasure and does not know to distinguish between graffiti, And protest, And the statement and creating a proper conservation, Despite the pervasive awareness and hopefully Scshiveno late will not be many jobs would not abandon the surrealist scene preservation, Although there are still many jobs and other jobs around city join its West Bank and its eastern bank, Mainly in the south and its downtown, The work is by”S surreal scene of tax’ Artists who do their own work, Together, Or chain when an artist / actress make her work location I and joined the rest, There are dozens of sites in coordinating Works together with hundreds of works from different, Some of the artists are also working the streets of Europe and some moved or the process of moving from the street to galleries and museums, המובלים והייחודיים שעבודותיהן הם יצירות הראויות לשימור שעליהם אדבר בפוסט זה הם SMD, style must die zero cent, know hope, foma, cloned, Independent and shared their works speak to me, There are other members of the group and there are other groups and movements, This scene of surreal street art creates a space Tel Aviv, Unique art scene in it but a little imagination and creativity and is a living museum had a large crowd.
לא פעם שמעתי שהשוו את עבודותיו של cloned Picasso (אם כי אני מזהה זאת גם בחלק מעבודותיו של zero cent ) Works, Tax is also fertile’ Works, Surreal characters i repeat very many situations, sometimes mundane and sometimes alien, Number of heads, Halved, Partial, Parts are not in situ, Animals, Home geese, Liwitn With situations from his imagination, Sometimes bearing the caption fit one nickname, Great fillings include caption text reminiscent of primitive symbols, His works stop the viewer and make him take a moment, know hope His works mainly with figures that repeat themselves of a character or two similarity are slim and tall and sad kind of between this world and another, Simulations are characterized by a criss-cross lines and minimalist short covering them apart from their faces, Sometimes For each font, Sometimes part or whole body part, But the criss-cross lines appear where he work, Like simulations Draw, Created themselves, Or are the artist himself, Covered with a hood that creates them in, Along with birds, Hearts, Sometimes the body, Sometimes on the ground, Sometimes white and sometimes red or object and often accompanied by a caption, Always interact with themselves or with the environment, fomaSurrealist artist is moving in three dimensions, It has the same characteristic Gothic characters the lower part is missing or incomplete, She also uses minimalist lines, But there the similarity long full portrait junk themselves extravagantly, When the body can be a human body or animal and the feminist works, Photo where her face covered with plastic or rubber (Maybe a condom), Her hair is visible, Text of a stalker is facing to the street and address of the word ritual red, There is also the vagina works. Surrealist works of zero cent Particular are characterized by repetitive work of many artists, Their broad teeth in its own entity, They can be inside and to expand outside the front, They can be any mid-body, Or outside the body, It is disproportionate to the body, He expands, Intensifies, Simulations are life, Or outside the living and the colors are dream jobs, The works of Merk ו robat They work .Writing Very high level, יצירתית ואומנותית היוצרות סיפור הלוקח אותנו לעולם קסום. Of colors, Forms, Characters and plots
This surreal scene is unique and can be one of the shop window of Tel Aviv as a city creates, You can preserve many of the works or transferred, Many of the works are the iron doors of garages and factories, Walls of marginal or abandoned buildings and rows of abandoned buildings, Abandoned areas and buildings for demolition or re-design, Make them new life and turn them into temporary galleries and urban safe places, So that they contribute to the city and security of residents and a safe space, Like the coffee shop, Grocer's butcher shop and terrace, They create living space are abandoned and in some mixing of uses to the property, And populate the region quickened to new life, There are ways to preserve them, Or to put them in place after construction of the project, If it's an office building or other project, Transfer them to galleries or museums, Presented to the public various Blokisnim, This scene is a treasure to the city and the alternative art scene has to be Picasso Lines, René next Dalai Tel Aviv from here..